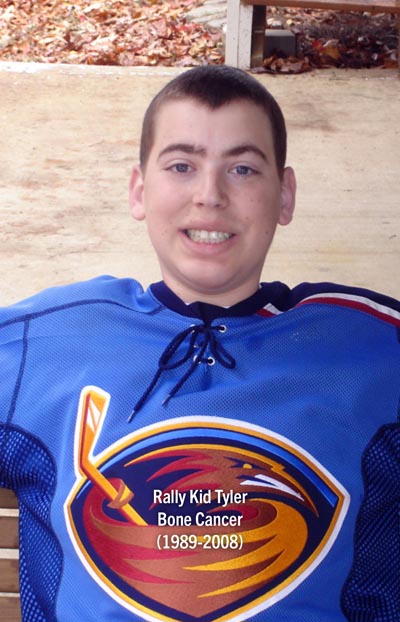 Tyler was an active and athletic 12-year-old boy when he was diagnosed with Ewing’s sarcoma in January 2002. The cancer was found in his left tibia but it had also spread to his lungs. Tyler underwent almost a year of chemotherapy plus six weeks of radiation to both areas. Tyler finished treatment for the first time on November 8, 2002. When his pain returned in the summer of 2004, a second biopsy showed that Tyler had indeed relapsed.

After almost three more years of “quality of life” chemotherapy and chronic pain in his leg, Tyler had his left leg amputated above the knee. He quickly adjusted to life as an amputee and worked hard to get back to a normal life. Tyler began training to participate in a triathlon for challenged athletes and continued to follow sports religiously.

On May 27, 2008, Tyler’s scans showed many tumors growing in his lungs. With no options left for a cure, Tyler chose to live his life to the fullest without any more treatments. He passed away in his sleep in the early morning hours of Aug 7, 2008, at the age of 19. A couple of unfinished items on his bucket list included watching the 2008 Summer Olympics and voting in the Presidential Election.

Tyler often said that kids with cancer didn’t seem to have a voice in raising money/awareness for childhood cancer. That is why he worked so hard with Rally—so that, someday, other kids would have better choices for treatment and a greater hope for a cure.