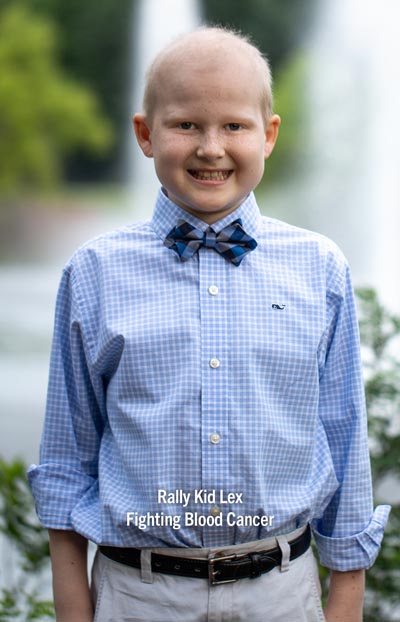 Alexander, aka Lex, began losing his energy and his appetite over the course of a month. He also had a fever for a few days and a week of severe muscle aches that were attributed to a virus. However, lab work done at the ER was normal. Lex did not fully recover and even developed additional symptoms like pain in his shoulder, chest wall and left elbow. After a night of severe chills, sweats and vomiting, Lex’s parents again took him to the ER, where he was diagnosed with Acute Lymphoblastic Leukemia.

Wanting to be a normal 10-year-old, it is difficult for Lex to watch life with school and sports go on without him, all while he is feeling sick and facing a long road to recovery. It seems unfair to Lex, and his parents are working hard to keep him positive. It has been a challenge for Lex’s parents to keep life as normal as possible for their teenaged daughters too. Lex’s three-year battle against cancer will also be the last years at home for his oldest sister before heading off to college. They are all trying to stay focused on remaining close as a family.

Before Lex was diagnosed, he had gotten a great part in his first middle school play. He spent four months thinking about it, practicing for it and dreaming about it. Family members were even planning to come into town to watch Lex perform, but sadly he missed it all because of cancer. Lex has also had to miss out on a couple of tennis tournaments. While he has been unable to play tennis since being diagnosed, he is having fun practicing his acting at home.

Lex has now reached the maintenance phase of his treatment!