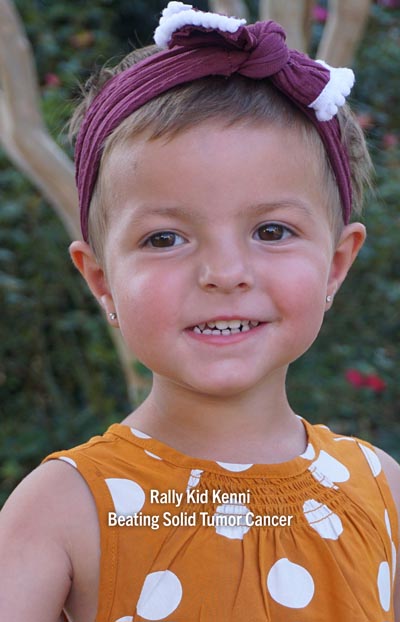 McKenna Shea, aka Kenni, had been experiencing arbitrary fevers and abdominal swelling for about a month. Her parents noticed that she was growing out instead of up and asked her pediatrician about it. The preliminary diagnosis was gas, but within a few weeks it was clear there had to be more going on. After fevers of 102-103 degrees and a belly that continued to swell, Kenni went back to the pediatrician for an x-ray. The pediatrician again determined gas to be the cause of the swelling but did send Kenni to the local children’s hospital for an ultrasound.

The ultrasound revealed a large mass in Kenni’s abdomen; subsequent CT and MRI scans showed that she had several yolk sac tumors in her abdomen, with the largest being on her ovary. After surgery to remove the largest mass, and many rounds of chemotherapy, Kenni was officially declared cancer free. She is back to being her spunky, carefree self!