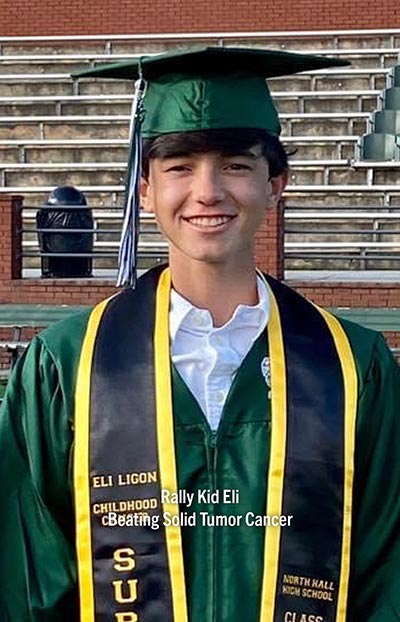 In the fall of 2014, Eli was enjoying football season and his 7th grade year. A lymph node swelled on his neck right after Christmas, so he was taken to the doctor and treated for what was assumed to be an infection.
After two full rounds of antibiotics, the lymph node was still swollen. Eli was then sent to an ENT where, ultimately, a biopsy revealed a tumor growing in Eli’s nasal cavity.

On March 6, 2015, Eli was diagnosed with Stage 4 Nasopharyngeal Carcinoma. Within a couple of days, the family was connected with the Rare Solid Tumor Team. Eli immediately began treatment, with six weeks of inpatient chemotherapy and nine weeks of radiation. He was declared cancer free in September; however, follow-up scans in November showed that the cancer had returned in Eli’s lungs.

Because Eli had already followed the standard treatment protocol treatment, his only options were trial drugs and/or immunotherapy. The family decided to send Eli’s blood to begin the three-month process for immunotherapy. In the interim, Eli began infusions of a new drug called Nivolumab, and he saw great success with it.