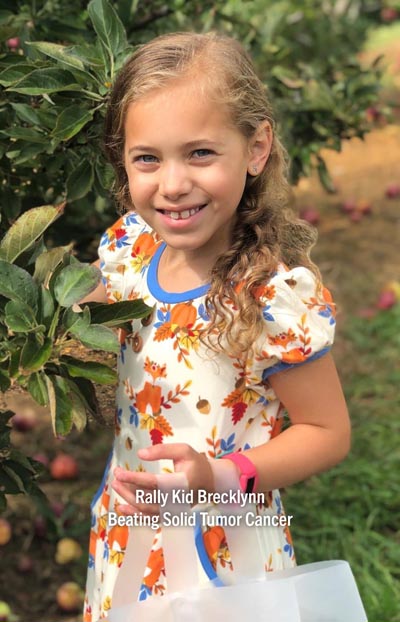 On November 19, 2015, exactly one month before Brecklynn’s third birthday, she began throwing up and was unable to stand. Brecklynn’s parents took her to the pediatrician, who did a chest X-ray thinking the bronchitis had turned into pneumonia. Unfortunately, it was not pneumonia.

The family was sent directly to the children’s hospital where they were admitted to the PICU. Subsequent scans not only revealed that Brecklynn had cancer, but that it had spread all over her little body. There was a primary tumor in her left lung, plus two in her brain, two in her spine, one in her arm and one in her leg.

Three days into the journey, Brecklynn underwent major brain surgery to remove the two tumors. A few days after, on Thanksgiving, she began her first round of chemotherapy. Brecklynn has since endured multiple rounds of chemo, two major lung surgeries and 20 rounds of whole brain radiation.

Sadly, Brecklynn relapsed in February 2017 and endured several more months of chemo. She is a strong fighter who has now been cancer free for two years!